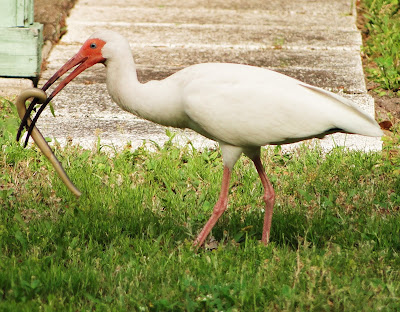 Labels: Birds, That is one hungry Ibis

ThreeC, I think so, but the body is so thick. Maybe a legless lizard of some kind?

Erin, it was! I kept thinking the Ibis was gonna drop it and give up, but nope, down it went.

What is it with you and snakes? Was that in your backyard?

Monday we watched a turkey (hen)walk through our yard. I've heard they were in the area but have never seen one on our street before. My sister (who lives about 30 miles south of me) has hundreds in her neighborhood. They usually travel in flocks, so I wonder where the rest are?

Nature has nowhere to go but into our yards.

We have such cool water birds here, don't we? You are really on the ball to catch so much going on in your own backyard!

Buzz, I LOVE SNAKES!! I think they're beautiful in their own way.

We saw the Ibis when we were driving to Sawgrass last Friday. They were hanging out in the neighborhood that backs up against the park.

It's the sad truth Buzz. We've pushed so many things out. :(


Diva, it was pure luck getting that picture!
Hope you're feeling better. xoxo

Well, this early bird got a lot more than a worm!!!

Thanks, Dani, today is the first day in almost three weeks I've had a bit of energy and am not exhausted. I AM DYING TO GET OUT OF THE HOUSE and into some nature this weekend!

Ibis be hungry. Last time I was at the Ding I watched a smallish heron do his best to chow down on a largish hermit crab. Took him a while to get it crunch enough that he could swallow it but they don't have hard beaks for nothing.

Awesome picture! That is one hungry ibis. I keep seeing ibises snatch up long, wormy things out of the ground but can't seem to get a good photo.

That is a WHOA!

Is this snake week or what!! At least, you let the bird keep its lunch.LOL love you baby girl, I'll see you soon.

Nice photo! We always have tons of ibises around, but I've never seen one with such a great catch!

Wow! What a catch - both for you and the Ibis. Great shot.

Simply amazing!!! How fortunate that you were there!!

Wonderful, Dani! I can visualize how excited you'd have been when you spotted this!

It really was cool to see!!!