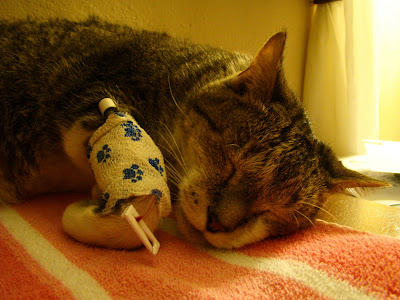 It's been a rough week for our poor Kitty and her diabetes. On Monday she bottomed out, and started having seizures from the low blood sugar. It was touch and go there for awhile, but she's home now and resting comfortably. She doesn't like having the iv line still in, but if all goes well, they will take it out tomorrow.

In other sad news, we lost Silky girl to a predator attack last week. *sigh* We miss her fluffy self terribly.

Gonna go out to the garden now and get some chores done. Later on today I'll try and get some veggie pics up.
Posted by Dani at 7:34 AM

This has been a terrible week for pet & farm friends it seems. A blogger friend of mine lost her cat to a fisher attack just a couple of days ago. Poor Silky

So sorry about your awful week. What a terrible thing to lose one of the girlz and a shame about poor kitty. I hope she recovers and soon.

I'm just heartbroken that you are going through so much loss. Silky was so beautiful but I know that the threat of predators is always there. As for the kitty, here's hoping for a full recovery.

I think a pet turkey would help.

Oh Dani - I'm so sorry about Kitty and your silky. I haven't been commenting much on anyone's blogs lately - I'm just an all-around-online-slacker these days, but please know you're in my thoughts.

the price we pay for loving these creatures is having them fail or losing them. :-(

I hope your garden helps soothe the soul.

*shudder* I've heard those fishers are quite the hunters.

ThreeC, we miss Silky. :( She was John's best girl.

Shamy, yep, a yard turkey is the way to go!

Thank you Kate. :) And don't you worry about being a slacker! It's good for the soul to take a break every so often.

Boxer, life with be so dull without our critters. I love them all so very much.

Wow, life has not been kind to the animals lovers of late. Very sorry to hear you lost Fluffy, and best wishes for a speedy kitty recovery!

OK I'm clueless (in so many ways) what fishers are we talking about?

Big Shamu, mostly they are in northern MN, maybe Maine, North Dakota and Canada... VERY NASTY creatures - imagine temperament like a bobcat/cougar but stealthy small like a mink or ferret!

ThreeC has had a few roaming her dairy farm.

Oh, man. This is really terrible. I hope your kitty gets better quick and I'm so sorry about your Silky.

I'm gonna check the backyard chicken forum later...maybe someone local has a chick for sale.

I'm sorry about Silky. I used to raise Rhode Island Reds and a bobcat starting picking them off, one a night until they were all gone. I just couldn't go through that again so stopped chicken farming.

Poor Kitty! My neighbors just lost one of their chickens to a raccoon....bad week for everyone!

So, so sorry to hear about all of your animal troubles. Did you find out what type of critter was in the chicken coop?

Poor Kitty. I sincerely hope she is feeling better. And Silky girl - how incredibly sad. Here's to a better week next week!

Sorry to hear about your rough weekend. Sure hope kitty is feeling better by now.