We Know You're Up There 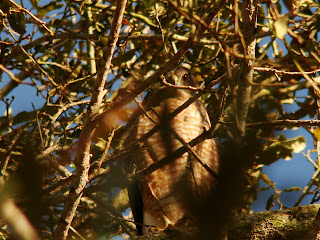 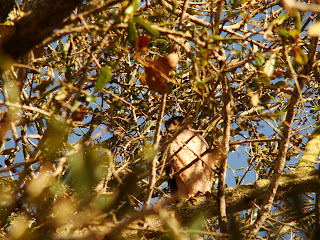 Oh my, scoping out lunch?

Hawks are so cool. I saw one the other day that I swear had a wing span as wide as my car! I would love to have seen him land and take his picture but he never did land and then I lost sight of him. Will he eat your chicks?

Darla, she hasn't tried going after the girls, but the Mourning Doves aren't so lucky.

ScMomma, that would have been so cool to see!!
The hawk hasn't tried to attack the chickens and seeing that they are about the same size, I don't think he/she would. The one we do worry about is the Red-Shoulder that comes through. He's attacked both Vera and Laverne in the past.

Be careful. A hawk has been getting the chickens at our historical village. The last one, our maintenance man heard her screeching and came out just in time to see the hawk snatch it up and fly off with it. He started cursing and yelling at the hawk and told it to let go of hte chicken and dang if hte hawk didn't oblidge, but by that time hte chicken was high up in the air and hit the ground with a thud. He thought she was dead, picked her up and saw she was breathing, and just in shock so put her back in the pen. She lost some feathers, but eventually woke up, but she still won't come back out of the pen.

Cathy, I wish the big girls didn't put up such a ruckus about staying in their coop. They sure would be a lot safer!

what a wonderful shot--great photo. Beauty of a hawk too.

How many chicks do ya have Dani?

We have six all together. Laverne, Yoko, Vera, Peanut Butter, Silky, and Cotton. Eventually, we will need to find Cotton a home because he's a roo. He's being quiet, for now he stays. As you can imagine, my husband, has alot of gray hair. LOL

i have two bantam hens and they are very hawk savvy - the have a low trill for "danger". once in the evening they started that trill (they have a basket in the kitchen where they hang out) and i thought, "what the heck its dark outside" and i looked out and there was a black bear just on the other side of the deck railing.


great photos of the hawk and enjoyed the video!

Chickory, little Vera makes that danger sound too. Kinda freaky when you hear it.

I'm always fascinated to see how birds have the keenest eyes for the birds of prey and owls that invade their space.

When the B's were just chicks, a red tail swooped into our yard to grab a snack. Blu, our mini Aussie was on patrol and chased the hawk out. Neat pics of your hawk :), but scary

Robert, I find it fascinating as well.

James, another good reason for us to get a doggie. :)

Lisa, they've been doing a lot of that recently!